“Kim Jong-Il died because at the end he was lil’ Kim Jong Too Ill.” — Yasha Harari

“Top 10 Occupy History jokes”
10. So if America won the war in Iraq, and to the victor go the spoils, then why is China (which opposed the war) the big winner of free Iraq petro-dollars?
9. Now that Kim Jong-Il is with his maker, will he be known as the “Eternal Beloved Leader” or “The guy with the weird hairdo that we’re glad to get rid of”?
8. Since North Korea is no longer run by li’l Kim, what’s the rap on their nukes?
7. After learning of the death of the North Korean dictator Kim Jong-Il, conservative Democrats in Washington were wondering, WWBCD – What Would Bill Clinton Do?
6. You can try to #OccupyHistory with revisionism all you want, but in the end, all the poisons slip out.
5. Following the death of Lil’ Kim Jong-Il, the American rapper known as Lil’ Kim can no longer pursue her trademark infringement suit against the bouffant loving short tyrant in plain counter-culture suits.
4. If you Occupy History books, does that mean you’re preventing the other 99% from reading them?
3. The war in Iraq is over. Osama bin Laden is dead. Lil’ Kim Jong-Il is dead. A bunch of Arab dictators are dead, ousted from power, or under great pressure to leave office. People power is reversing many of the acts carried out by the administration of President George W. Bush. So … why is the economy still in the tank?
2. Can you really occupy history if you can’t even occupy the present?
… and the #1 #OccupyHistory joke  is:
1. If you have to read between the sheets just to learn the facts, you might be someone who likes to Occupy History.
Reference: Yasha Harari for TheDailyDose.com. 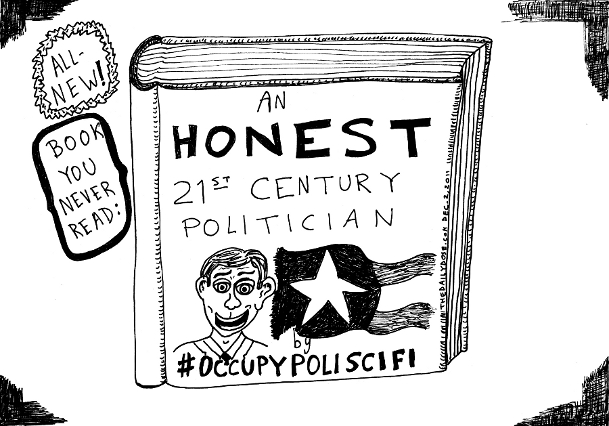 “Beam me up, Scotty. There’s no honest PoliSciFi to occupy down here.” — Yasha Harari

“Top 10 Occupy Poli Sci-Fi jokes”
10. Veteran Congressman to Rookie Congressman: Of course you have to compromise. All that political sci-fi stuff we say to get elected, that’s just to occupy the airwaves between elections.
9. To Occupy Political Lies and to Occupy Poli-Sci-Fi, is doubly-redundant.
8. PoliSciFi of the week: Barney Frank won’t run again, not because he doesn’t have a chance in his next election, but because his stamp collecting hobby is starting to occupy too much of his time.
7. If #OccupyWallStreet thought politicians in Washington, DC and bankers on Wall Street were able to improve the system, would you say they are reading too much political science fiction?
6. Newt Gingrich, a man whose personal life is rife with lying, cheating, and extra marital affairs, is the Great White-Haired Hope of the GOP for the 2012 Presidential Elections. It seems the elephant in the room has chosen to Occupy Poli-Sci-Fi.
5. Occupy Poli-SciFi seeks another round of Financing: #OWS members wanted to feed the world, so they opened an account at the World Bank and asked for a seed fund to grow truthful political leaders for the Third World. Unfortunately given the world drought situation, those nations will have to wait at least another generation before there are any new truthful politicians available.
4. WWPSFD – What Would Political Science Fiction Determine?
3. When #OccupyWallStreet preach for change, it’s political fantasy. When politicians promise, it’s poli-sci-fi.
2. During the American Fall, #OWS practiced Political Science fiction with a touch of fantasy, backed by free form advertising campaigns.
… and the #1 #OccupyPoliSciFi joke  is:
1. #OccupyPoliSciFi – The day the Electoral College became equitable and fully accountable to the People.
Reference: Yasha Harari for TheDailyDose.com.

“A man stuck on a desert island has a solar-powered shortwave radio and after hearing about the #OccupyWallStreet protests decides to demonstrate against himself for a more equitable share of the spoils.” — Yasha Harari

“Top 10 Occupy Solitude jokes”
10. Wall Street bankers might have more empathy for #OccupyWallStreet protesters if they didn’t have their own private islands to hide on.
9. If #OWS people Occupy Desert Islands, would they still be as upset with the system back home?
8. #OccupySolitude – Because after two months of trying to #OccupyTogether the only thing that was achieved is a lot of noise without a lot of poise.
7. If everyone who feels alone decides to occupy solitude together, how would that work?
6.  #OccupySurvivor – It’s time for the 99% of Survivor rejects to put an end to that corrupt, capitalist, backstabbing reality TV show.
5. A Wall Street banker and an OWS protester are stuck on a desert island together, and the banker enriches himself off of the protester by controlling half the coconuts.
4. A woodland Hermit protested against the top 1% by occupying the mountaintop forest by himself.
3. A loner who manages to eek out a living off the grid and outside of the network, decided that if he occupies solitude, he would be protesting against himself.
2. Solomon Grundie, a lonely and sad French student is despondent  about his poor when his teacher tells him, “Sol, etude!”
… and the #1 #OccupySolitude joke  is:
1. #OccupyAlone – Pitting uniques among the 99% against elites among the top 1%.
Reference: Yasha Harari for TheDailyDose.com.

“It’s perfectly legal for #OWS supporters to protest for greater freedom and social justice in Antarctica, and there are no cops there to remove any squatter tents.” — Yasha Harari

“Top 10 South Pole jokes”
10. #OccupyAntarctica – Now that #OccupyWallStreet protest sites are being dismantled by force, the Occupy Wall Street protesters plan to Occupy Antarctica because 100% of the true and magnectic Poles are controlled by just 4 Poles, and none of them is even Polish by birth.
9. Government – Q: Why does the South Pole Propaganda Ministry have a hard time getting its side of the story covered by the media? A: You can’t pay for airtime with fish.
8. Survivor – In the fight for Survival of the Fittest, many animals by the South Pole are forced off the Island of Antarctica because they did not get the seal of approval to stay on.
7. Ski Resort – Why are there no popular ski resorts at the South Pole? No one believes you can do winter ski in a desert.
6. Blonde – Q: Why do dumb blondes love running around in bikinis at the South Pole? A: They aren’t affected by brain freeze.
5. Bar Joke – A seal, a penguin and a polar bear go into a South Pole bar, and the bartender serves them their drinks on ice.
4. Philosophical – What do vegetarian Polar Bears eat at the South Pole?
3. Nightly – In the South Pole, it’s always darkest before Spring.
2. Snap – Stop telling me I’m being too protective of my penguin egg!
… and the #1 South Pole joke  is:
1. Diss – You would be so much cooler if you were in the South Pole.
Reference: Yasha Harari for TheDailyDose.com. 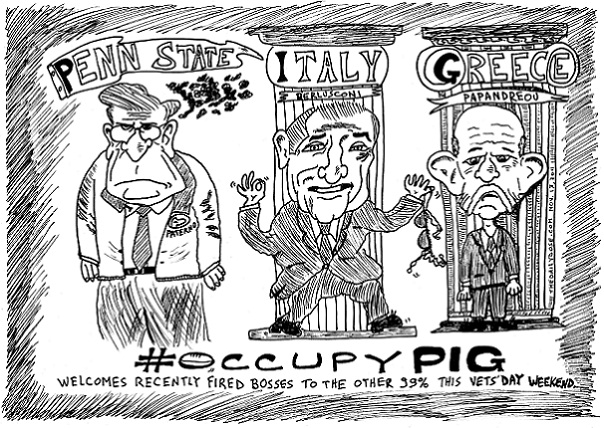 “If Wall Street was a pig, lots of people couldn’t stomach it – for religious reasons.” — Yasha Harari

“Top 10 #OccupyPIG jokes”
10. #OccupyPennState – During the darkest days in Happy Valley.
9. #OccupyItaly – In the end, debt cost more than burlesque on knee for Berlusconi.
8. #OccupyGreece – Because the 99% think forming a plan to save the economy should always lead to firing the Prime Minister who came up with the plan.
7. #OccupySow – Because Sow rhymes with Dow.
6. #OccupyHog – Because the 99% also want motorcycles.
5. #OccupyBoar – It’s what Asterix and Obelix do best, aside from occupying the Roman occupiers.
4. #OccupySwine – It’s what pig farmers do.
3. #OccupyPorker – Because the top 1% hog over half the pork.
2. #OccupySquealer – Because the 99% want Deliverance from the top 1%.
… and the #1 Occupy PIG joke  is:
1. #OccupyPIG – Paterno, Berlusconi and Papandreou show up for an audition of “The Apprentice” and The Donald immediately tells them “You’re Fired!”
Reference: Yasha Harari for TheDailyDose.com. 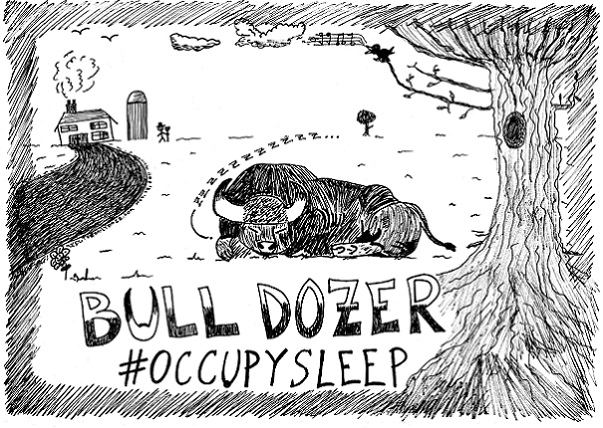 “If the 99% decided to Occupy Sleep, would there be any dreams left for the top 1%?” — Yasha Harari 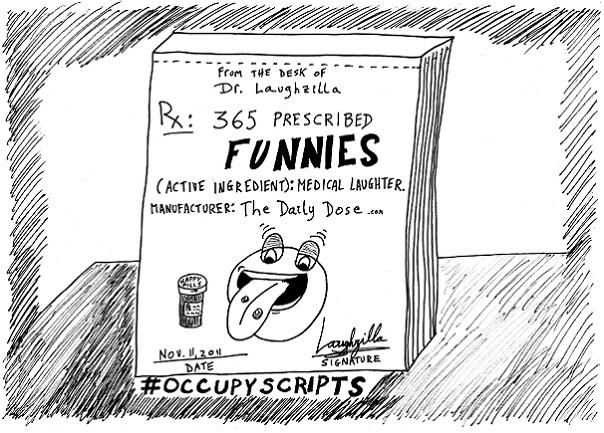 “If the 99% were to Occupy Prescriptions, the top 1% would earn more profits in big pharmaceutical companies.” — Yasha Harari

“Top 10 #OccupyScripts jokes”
10. #OccupyMCR – Because you’re too lazy to be creative, and too occupied to do nothing.
9. #OccupyXanax – When MCR is too light.
8. #OccupyOxycontin – When a Xanax isn’t enough.
7. #OccupyMedicalMarijuana – It’s how the high ways were built in California.
6. #OccupyCodeine – Because pharmacies love selling it in small doses.
5. #OccupyMethadone – It’s the stuff the docs condone.
4. #OccupySynapse – It’s a party for your neurons.
3. #OccupyPlacebo – Nothing cures a head full of booger like a colored pill full of sugar.
2. #OccupyControl – Or else you might lose it.
… and the #1 Occupy Prescriptions joke  is:
1. #OccupyScripts – Relieves #OccupyWallStreet aches and gains.
Reference: Yasha Harari for TheDailyDose.com.

“If Wall Street wealth is a pie loved only by the top 1%, why do half the people buy a slice?” — Yasha Harari

“Top 10 #OccupyAwwwCuePie jokes”
10. #OccupyHawkYouPi – Telling the M*A*S*H doctor that he’s 22/7.
9. #OccupyOkEwePie – It’s not wrong to make a meat pie of ewe.
8. #OccupyOKeyYouPai – When Francis Scott Key was compared to a Thai person.
7. #OccupyOakHughPie – A lady of the night who fits the bill for a certain wooden British actor.
6. #OccupyHawQPaE – Donkey Space Being Father of E.
5. #OccupyOKHughPie – When the 99% agree with the top 1% of Playboy Bunnies Hugh Hefner counts among his girlfriends.
4. #OccupyOhhhhKIUPIGH – When you’re surprised to find out that Occupy Wall Street is run by the scientific multiplication of the Kilo International Unit and the PIGH gene.
3. #OccupyOhKyooPI – Remembering the famous Korean Private Investigator.
2. #OccupyAQueuePie – One baked good waiting in line.
… and the #1 Occupy Awww Cue Pie joke  is:
1. #OccupyAwwwCuePie – When you load a picture to make viewers smile.
Reference: Yasha Harari for TheDailyDose.com. 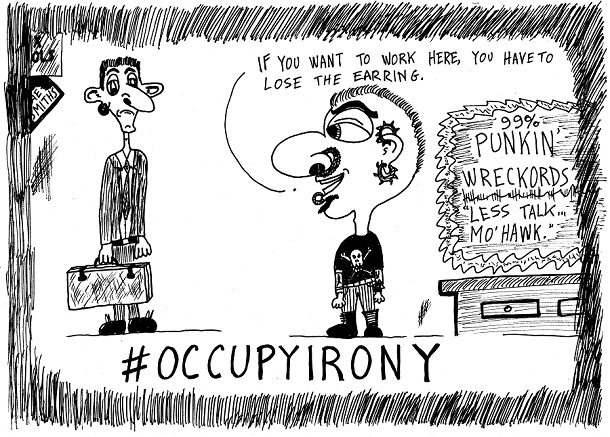 “Occupy Irony: A Wall Street banker in the Top 1% gets change for a dollar from an OccupyWallStreet protester in the 99%” — Yasha Harari

“Top 10 #OccupyIrony jokes”
10. #OccupyUnexpected – Three protesters all wearing V for Vendetta masks are surprised when, during a private cigarette break, they find that they all work for the Time Warner film props department.
9. #OccupyUnexpected – Rise up peacefully and quietly against those who have no power in places where no one will notice.
8. #OccupySurprise – Make sure you remember to bring the cake girl. Ta-Daaa!
7. #OccupyOutOfNowhere – Gather with a flash mob when it’s least expected.
6. #OccupyRare – Just think how much rarer rare things will be if we divide everything up more evenly.
5. #OccupyUncommon – Unlike other occupations, but not quite unique. A lot like being a Wall Street banker or an #OccupyWallStreet protester.
4. #OccupyVacancy – It is impossible even for the top 1% to occupy a vacancy.
3. #OccupySquats – Squatters also live behind walls on streets.
2. #OccupyDisenfranchised – Open Source P2P occupation for the powerless.
… and the #1 Occupy Irony joke  is:
1. #OccupyIrony – Because you’re considered to be in the top 1% of music aficionados and you work in an Alternative Music shop, even though you genuinely love wearing your Britney Spears Concert t-shirt, and not because you’re being ironic.
Reference: Yasha Harari for TheDailyDose.com. 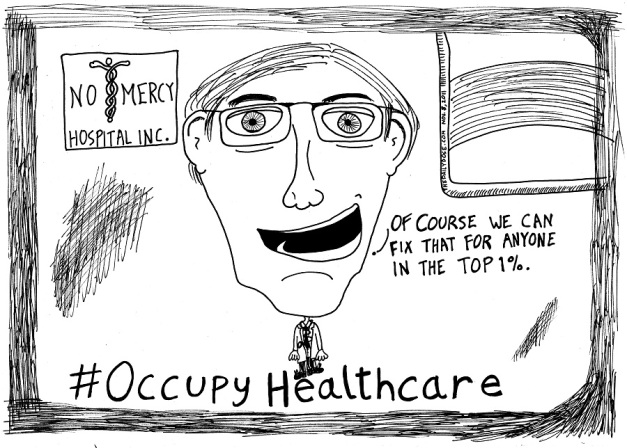 “If Wall Street was a Hospital run by a private HMO, would the 99% want more highly paid doctors and nurses, or more bulk bandages for everyone?” — Yasha Harari

“Top 10 #OccupyHealthcare jokes”
10. #OccupyDoctors – Because you really don’t want any of the top 1% of doctors performing surgery on you, right?
9. #OccupyNurses – If you’re lucky, the nurses will be hot and occupy you back.
8. #OccupyOrderlies – You make a mess. They clean it up. Just like a Wall Street banker.
7. #OccupyHMOBureaucrats – The ultimate nitpickers whose penchant for pencil pushing is an affront to life, liberty, and the pursuit of obliterating red tape from your path to happiness.
6. #OccupyHospitals – If millions of people fill up every Emergency Room with frivolous cases, would you want the hospitals to remove the top 1% of really sick patients?
5. #OccupyPrevention – Because when it comes to Wall Street and debt, an ounce of prevention is worth a few Trillion dollars of bailouts.
4. #OccupyHealthcare – It is the right of the people to assemble peacefully and demand medical treatment of their obesity caused by an inability to put down the Twinkies.
3. #OccupyEMTs – Because nothing helps trauma victims like interfering know-it-alls.
2. #OccupyHospices – When the bell tolls, too many of the other 99% end up there for it to be run exclusively by old nuns and underemployed medical staff.
… and the #1 Occupy Healthcare joke  is:
1. #OccupyFirstAid – Because CPR – just like Centralized Populist Regulation – interferes with nature to save the incapacitated from dying.
Reference: Yasha Harari for TheDailyDose.com.

Funny Jokes and Laughs :)
Create a free website or blog at WordPress.com.